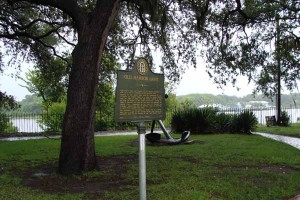 Marker Text: This beacon light was erected by the federal government in 1858 as an aid to navigation of the Savannah River.

Standing 77 feet above the river level and illuminated by gas, it served for several years as a guide to vessels passing over the hulls of ships that the British scuttled in 1779 to close the harbor to the French naval forces. During the Siege of Savannah that year by the French and Americans the warship Truite, commanded by the Count de Chastenet de Puysegur, shelled this area of Savannah from her anchorage in Back River opposite this point.

The development of this portion of Emmet Park as a garden area was a project of the Trustees Garden Club during the centennial year of the erection of the “Old Harbor Light.”

Tips for Finding This Site: Located near Old Harbor Light in park at Bay and East Broad Sts., Savannah