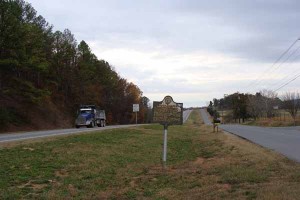 Marker Text: May 17, 1864, Johnston’s forces [CSA] retreated S. From Reseca and paused here on an E. – W. line, the intention being to make a stand against the Federals in close pursuit.

Finding the position untenable due to width of Oothcaloga Valley, Johnston withdrew at midnight. Hardee’s Corps [CSA] was astride the road at this point.

In rear-guard action, detachments from Hardee’s Corps held the stone residence of Robert C. Saxon, 0.2 mi. N. of the County Line, until midnight.

Tips for Finding This Site: US 41 just south of Bartow-Gordon County line in Adairsville.