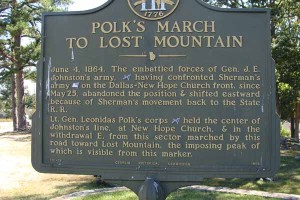 Marker Text: June 4, 1864. The embattled forces of Gen. J. E. Johnston’s army, [CS] having confronted Sherman’s army [US] on the Dallas- New Hope Church front, since May 25, abandoned the position & shifted eastward because of Sherman’s movement back to the State R.R.

Lt. Gen. Leonidas Polk’s corps [CS] held the center of Johnston’s line, at New Hope Church, & in the withdrawal E. from this sector marched by this road toward Lost Mountain, the imposing peak of which is visible from this marker.

Tips for Finding This Site: At the small park next to the New Hope Baptist Church, at Hwy 361 and Bobo Rd., New Hope, GA