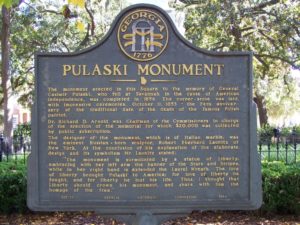 Marker Text: The monument erected in this Square to the memory of General Casimir Pulaski, who fell at Savannah in the cause of American Independence, was completed in 1854. The corner-stone was laid, with impressive ceremonies, October 11, 1853 – the 74th anniversary of the traditional date of the death of the famous Polish patriot.

Dr. Richard D. Arnold was Chairman of the Commissioners in charge of the erection of the memorial for which $20,000 was collected by public subscription.

The designer of the monument, which is of Italian marble, was the eminent Russian-born sculptor, Robert Eberhard Launitz of New York. At the conclusion of his explanation of the elaborate design and its symbolism Mr. Launitz stated:

“The monument is surmounted by a statue of Liberty, embracing with her left arm the banner of the Stars and Stripes, while in her right hand is extended the Laurel Wreath. The love of liberty brought Pulaski to America; for love of liberty he fought, and for liberty he lost his life. Thus, I thought that Liberty should crown his monument, and share with him the homage of the free.”