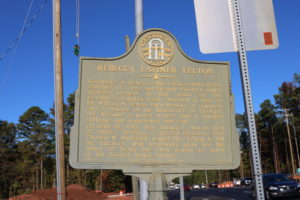 Marker Text:  Birthplace of Rebecca Ann Latimer (1835-1930), daughter of Chas. and Eleanor (Swift) Latimer, pioneer settlers at this point on the Decatur-Covington road. Married in 1853 to Dr. William H. Felton, later Member of Congress and a trustee of the University of Georgia, she became a noted writer and a tireless suffrage and temperance advocate.

On September 22, 1922, Sen. Thomas E. Watson died in office. Pending a special election, Gov. Thomas W. Hardwick named Mrs. Felton to fill the vacancy, thus bestowing upon her the honor of being the first women to serve in the United States Senate.