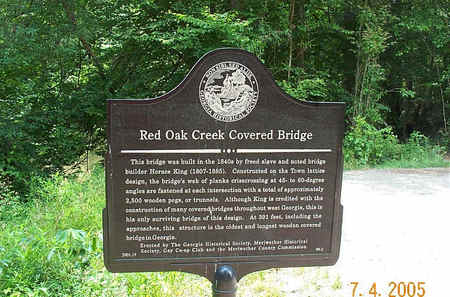 Marker Text: This bridge was built in the 1840s by freed slave and noted bridge builder Horace King (1807-1885). Constructed on the Town lattice design, the bridge’s web of planks crisscrossing at 45- to 60-degree angles are fastened at each intersection with a total of approximately 2,500 wooden pegs, or trunnels. Although King is credited with the construction of many covered bridges throughout west Georgia, this is his only surviving bridge of this design. At 391 feet, including the approaches, this structure is the oldest and longest wooden covered bridge in Georgia.