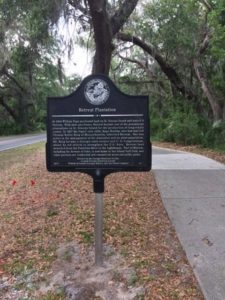 Marker Text: In 1804 William Page purchased land on St. Simons Sound and named it Retreat. With later purchases, Retreat became one of the preeminent plantations on St. Simons Island for the production of long-staple cotton. In 1827 the Pages’ only child, Anna Matilda, who had married Thomas Butler King of Massachusetts, inherited Retreat. She was active in the management of the plantation and its slave population. Mr. King became a Georgia state senator and U. S. Congressman, where he led efforts to strengthen the U.S. Navy. Retreat land stretched from the Frederica River to the Lighthouse. Part of Retreat, including the Avenue of Oaks, is now home to Sea Island Golf Club, and other portions are residential and commercial areas and public parks.

Tips for Finding This Site: On Kings Way, 2/10 of a mile NW of the intersection of Kings Way and Frederica Road/Retreat Avenue