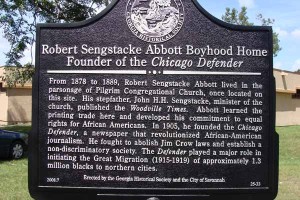 Marker Text: From 1878 to 1889, Robert Sengstacke Abbott lived in the parsonage of Pilgrim Congregational Church, once located on this site. His stepfather, John H.H. Sengstacke, minister of the church, published the Woodville Times. Abbott learned the printing trade here and developed his commitment to equal rights for African Americans. In 1905, he founded the Chicago Defender, a newspaper that revolutionized African-American journalism. He fought to abolish Jim Crow laws and establish a non-discriminatory society. The Defender played a major role in initiating the Great Migration (1915-1919) of approximately 1.3 million blacks to northern cities.

Erected by the Georgia Historical Society and the City of Savannah