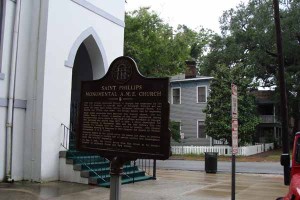 Marker Text: The first African Methodist Church in Georgia was organized by the Rev. A. L. Stanford on June 16, 1865, at Savannah, Georgia and was given the name Saint Phillip African Methodist Episcopal Church. Two months and fifteen days later, the Sunday School had its beginning.

Many great preachers have pastored this historic church. One was Bishop Henry M. Turner, a member of the state legislature during Reconstruction and a leader of the Back-to-Africa movement in Georgia, who pastored this church from 1870 to 1874. A storm demolished the church building in September 1896 and the Odd Fellow’s Hall was secured for worship until the church could be rebuilt. The General Conference meeting in Waycross in 1897 renamed the church St. Phillips Monumental A.M.E. Church.

Memorial tablets in the church carry the names and dates of service of all the bishops in Georgia and all pastors serving this congregation since the church’s beginning.

On May 7, 1961, the Church moved from Hall Street to its present location at Jefferson Street and Park Avenue.

Tips for Finding This Site: On south side of Park Ave., about 15 yards east of Jefferson St., Savannah