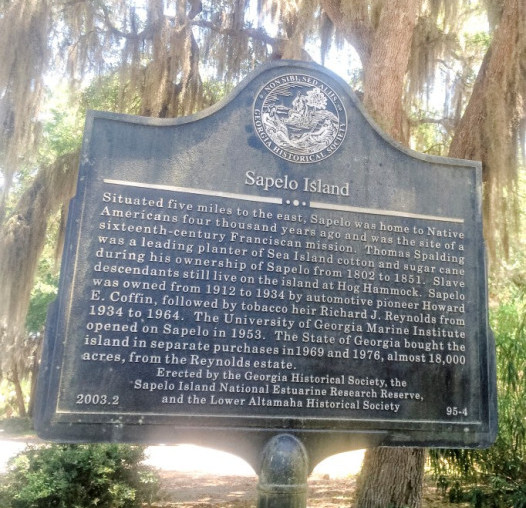 Marker Text: Situated five miles to the east, Sapelo was home to Native Americans four thousand years ago and was the site of a sixteenth-century Franciscan mission. Thomas Spalding was a leading planter of Sea Island cotton and sugar cane during his ownership of Sapelo from 1802 to 1851. Slave descendants still live on the island at Hog Hammock. Sapelo was owned from 1912 to 1934 by automotive pioneer Howard E. Coffin, followed by tobacco heir Richard J. Reynolds from 1934 to 1964. The University of Georgia Marine Institute opened on Sapelo in 1953. The State of Georgia bought the island in separate purchases in 1969 and 1976, almost 18,000 acres, from the Reynolds estate.

Tips for Finding This Marker: At the Sapelo Island Visitor Center, off GA 99 in Meridian.
To learn more about this marker topic, visit our Hidden Histories online exhibit.