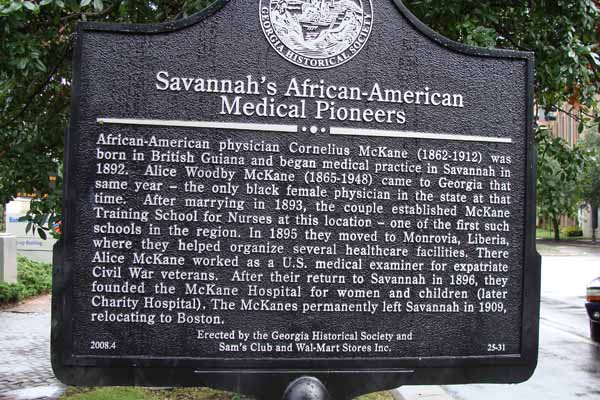 Marker Text: African-American physician Cornelius McKane (1862-1912) was born in British Guiana and began medical practice in Savannah in 1892. Alice Woodby McKane (1865-1948) came to Georgia that same year – the only black female physician in the state at that time. After marrying in 1893, the couple established McKane Training School for Nurses at this location – one of the first such schools in the region. In 1895 they moved to Monrovia, Liberia, where they helped organize several healthcare facilities. There Alice McKane worked as a U.S. medical examiner for expatriate Civil War veterans. After their return to Savannah in 1896, they founded the McKane Hospital for women and children (later Charity Hospital). The McKanes permanently left Savannah in 1909, relocating to Boston.

Erected by the Georgia Historical Society and Sam’s Club and Wal-mart Stores Inc.