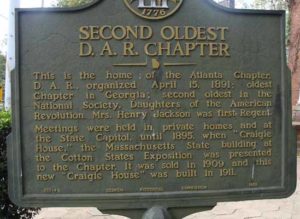 Marker Text: This is the home of the Atlanta Chapter, D.A.R, organized April 15, 1891; oldest Chapter in Georgia; second oldest in the National Society, Daughters of the American Revolution. Mrs. Henry Jackson was the first Regent.

Meetings were held in private homes and at the State Capitol, until 1895, when “Craigie House,” the Massachusetts State building at the Cotton States Exposition was presented to the Chapter. It was sold in 1909 and this new “Craigie House” was built in 1911.