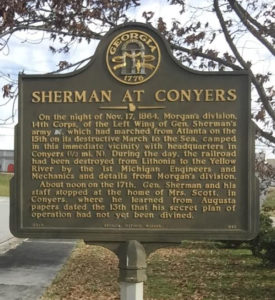 Marker Text: On the night of Nov. 17, 1864, Morgan’s division, 14th Corps, of the Left Wing of Gen. Sherman’s army [US], which had marched from Atlanta on the 15th on its destructive March to the Sea, camped in this immediate vicinity with headquarters in Conyers (1/2 mi.). During the day, the railroad had been destroyed from Lithonia to the Yellow River by the 1st Michigan Engineers and Mechanics and details from Morgan’s division.

About noon on the 17th, Gen. Sherman and his staff stopped at the home of Mrs. Scott, in Conyers, where he learned from Augusta papers dated the 13th that his secret plan of operation had not yet been divined.

Tips for Finding This Site: At the public library in downtown Conyers.