Sinking of the H.M.S. Otranto

Sinking of the H.M.S. Otranto 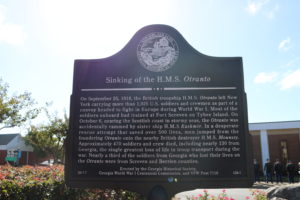 Marker Text: On September 25, 1918, the British troopship H.M.S. Otranto left New York carrying more than 1,025 U.S. soldiers and crewmen as part of a convoy headed to fight in Europe during World War I. Most of the soldiers onboard had trained at Fort Screven on Tybee Island. On October 6, nearing the Scottish coast in stormy seas, the Otranto was accidentally rammed by sister ship H.M.S Kashmir. In a desperate rescue attempt that saved over 500 lives, men jumped from the foundering Otranto onto the nearby British destroyer H.M.S. Mounsey. Approximately 470 soldiers and crew died, including nearly 130 from Georgia, the single greatest loss of life in troop transport during the war. Nearly a third of the soldiers from Georgia who lost their lives on the Otranto were from Screven and Berrien counties.

Tips for Finding This Marker: Located at 104 S. Main Street in Veteran’s Memorial Park adjacent to City Hall in Slyvania