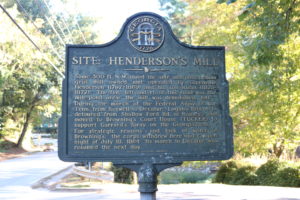 During the march of the Federal Army of the Tenn. from Roswell to Decatur, Logan’s 15th A.C. detoured from Shallow Ford Rd. at Rainey’s and moved to Browning’s Court House (TUCKER) to support Garrard’s foray on the Georgia R.R.

For strategic reasons – and lack of water at Browning’s, the corps withdrew here and camped night of July 18, 1864. Its march to Decatur was resumed the next day.

Tips for Finding This Marker: On Henderson Mill Road in Atlanta.