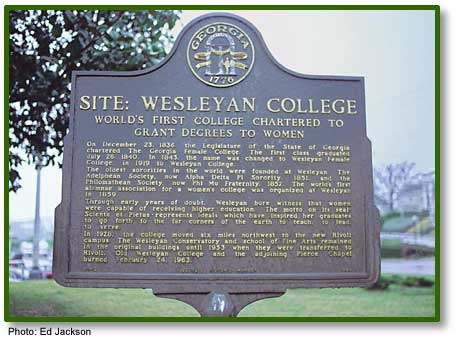 Marker Text: On December 23, 1836, the Legislature of the State of Georgia chartered The Georgia Female College. The first class graduated July 26, 1840. In 1843, the name was changed to Wesleyan Female College, in 1919 to Wesleyan College.

Through early years of doubt, Wesleyan bore witness that women were capable of receiving higher education. The motto on its seal – Scienta et Pietas – represents ideals which have inspired her graduates to go forth to the far corners of the earth to teach, to lead, to serve.

In 1928, the college moved six miles northwest to the new Rivoli campus. The Wesleyan Conservatory and school of Fine Arts remained in the original buildings until 1953 when they were transferred to Rivoli. Old Wesleyan College and the adjoining Pierce Chapel burned February 24, 1963.

Tips for Finding This Marker: At the intersection of College Street and Georgia Avenue in Macon.