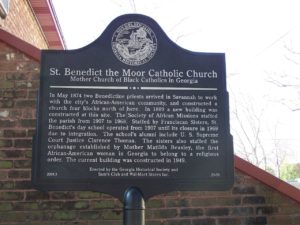 Marker Text: In May 1874 two Benedictine priests arrived in Savannah to work with the city’s African-American community, and constructed a church four blocks north of here. In 1889 a new building was constructed at this site. The Society of African Missions staffed the parish from 1907 to 1968. Staffed by Franciscan Sisters, St. Benedict’s day school operated from 1907 until its closure in 1969 due to integration. The school’s alumni include U. S. Supreme Court Justice Clarence Thomas. The sisters also staffed the orphanage established by Mother Matilda Beasley, the first African-American woman in Georgia to belong to a religious order. The current building was constructed in 1949.

Erected by the Georgia Historical Society and Sam´s Club and Wal-Mart Stores Inc.

Tips for Finding This Marker: At 556 East Gordon Street in Savannah