Sunbury: Home of Many Famous Persons

Sunbury: Home of Many Famous Persons 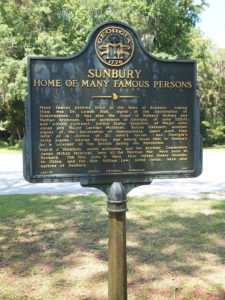 Marker Text: Many famous persons lived in the town of Sunbury. Among them was Dr. Lyman Hall, signer of the Declaration of Independence. It was also the home of Richard Howley and Nathan Brownson, later governors of Georgia; of John Elliott and Alfred Cuthbert, United States Senators; of Major John Jones and Major Lachlan McIntosh. Button Gwinnett, another signer of the Declaration of Independence, spent much time here as a Justice of St. John’s Parish, and Georgia’s third signer, George Walton, was among those held in Sunbury as a prisoner of the British during the Revolution.

Tips for Finding This Marker: At the intersection of Sunbury and Village Roads in Midway