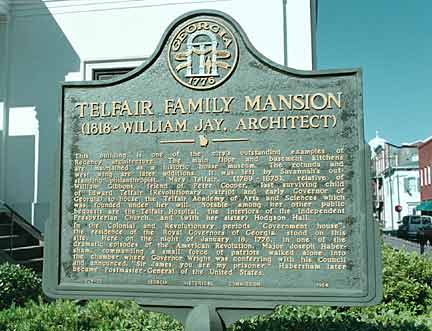 Marker Text: This building is one of the city’s outstanding examples of Regency architecture. The main floor and basement kitchens are maintained as a historic house museum. The rotunda and west wing are later additions. It was left by Savannah’s outstanding philanthropist, Mary Telfair (1789-1875), relative of William Gibbons, friend of Peter Cooper, last surviving child of Edward Telfair (Revolutionary patriot and early Governor of Georgia) to house the Telfair Academy of Arts and Sciences which was founded under her will. Notable among her other public bequests are the Telfair Hospital, the interiors of the Independent Presbyterian Church, and (with her sister) Hodgson Hall.

In the Colonial and Revolutionary periods “Government house”, the residence of the Royal Governors of Georgia, stood on this site. Here on the night of January 18, 1776, in one of the dramatic episodes of the American Revolution, Major Joseph Habersham, commanding a small force of patriots walked alone into the chamber where Governor Wright was conferring with his Council and announced, “Sir James, you are my prisoner.” Habersham later became Postmaster-General of the United States.

Tips for Finding This Marker: On Barnard and President Streets in Savannah
To learn more about this marker topic, visit our Hidden Histories online exhibit.