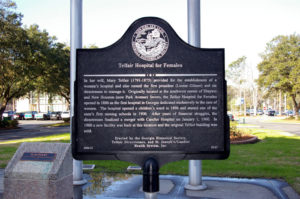 Marker Text: In her will, Mary Telfair (1791-1875) provided for the establishment of a women’s hospital and also named the first president (Louise Gilmer) and six directresses to manage it. Originally located at the southwest corner of Drayton and New Houston (now Park Avenue) Streets, the Telfair Hospital for Females opened in 1886 as the first hospital in Georgia dedicated exclusively to the care of women. The hospital opened a children’s ward in 1896 and started one of the state’s first nursing schools in 1900. After years of financial struggles, the directresses finalized a merger with Candler Hospital on January 1, 1960. In 1980 a new facility was built at this location and the original Telfair building was sold.

Tips for Finding This Marker: 5353 Reynolds Street in Savannah.
To learn more about this marker topic, visit our Hidden Histories online exhibit.