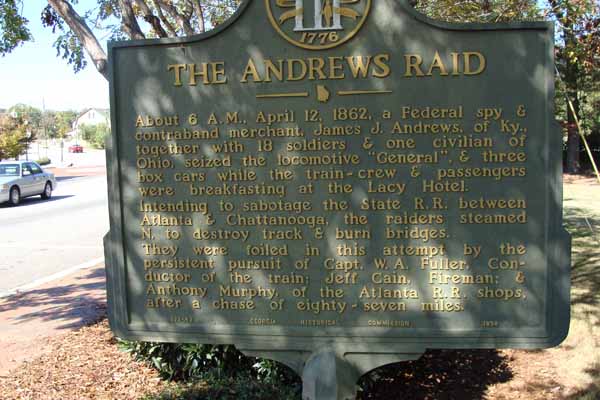 Marker Text: About 6 A.M., April 12, 1862, a Federal spy & contraband merchant, James J. Andrews, of Ky., together with 18 soldiers & one civilian of Ohio, seized the locomotive “General”, & three box cars while the train-crew & passengers were breakfasting at the Lacy Hotel.

They were foiled in this attempt by the persistent pursuit of Capt. W. A. Fuller, Conductor of the train: Jeff Cain, Fireman; & Anthony Murphy, of the Atlanta R. R. shops, after a chase of eighty-seven miles.

Tips for Finding This Marker: On GA 293 in downtown Kennesaw.