The Battles for Atlanta

The Battles for Atlanta 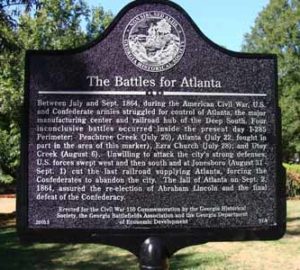 Marker Text: Between July and Sept. 1864, during the American Civil War, U.S. and Confederate armies struggled for control of Atlanta, the major manufacturing center and railroad hub of the Deep South. Four inconclusive battles occurred inside the present day I-285 Perimeter: Peachtree Creek (July 20), Atlanta (July 22, fought in part in the area of this marker), Ezra Church (July 28); and Utoy Creek (August 6). Unwilling to attack the city’s strong defenses, U.S. forces swept west and then south and at Jonesboro (August 31-Sept. 1) cut the last railroad supplying Atlanta, forcing the Confederates to abandon the city. The fall of Atlanta on Sept. 2, 1864, assured the re-election of Abraham Lincoln and the final defeat of the Confederacy.

Erected for the Civil War 150 commemoration by the Georgia Historical Society, the Georgia Battlefields Association and the Georgia Department of Economic Development.

Tips for Finding This Marker: At 453 Freedom Parkway in Atlanta