The Burning and Destruction of Atlanta

The Burning and Destruction of Atlanta 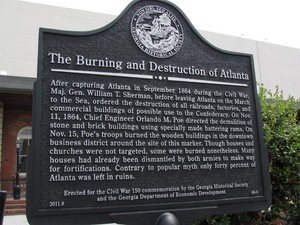 Marker Text: After capturing Atlanta in September 1864 during the Civil War, Maj. Gen. William T. Sherman, before leaving Atlanta on the March to the Sea, ordered the destruction of all railroads, factories, and commercial buildings of possible use to the Confederacy. On Nov. 11, 1864, Chief Engineer Orlando M. Poe directed the demolition of stone and brick buildings using specially made battering rams. On Nov. 15, Poe’s troops burned the wooden buildings in the downtown business district around the site of this marker. Though houses and churches were not targeted, some were burned nonetheless. Many houses had already been dismantled by both armies to make way for fortifications. Contrary to popular myth only forty percent of Atlanta was left in ruins.

Tips for Finding This Marker: At the intersection of Martin Luther King Jr. Drive and Central Avenue in Atlanta