The Capture of Covington

The Capture of Covington 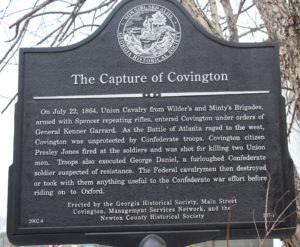 Marker Text: On July 22, 1864, Union Cavalry from Wilder’s and Minty’s Brigades, armed with Spencer repeating rifles, entered Covington under orders of General Keener Garrard. As the Battle of Atlanta raged to the west, Covington was unprotected by Confederate troops. Covington citizen Presley Jones fired at the soldiers and was shot for killing two Union men. Troops also executed George Daniel, a furloughed Confederate soldier suspected of resistance. The Federal cavalrymen then destroyed or took with them anything useful to the Confederate war effort before riding on to Oxford.

Tips for Finding This Marker: On Washington Street, between Lee and Brown Streets in Covington