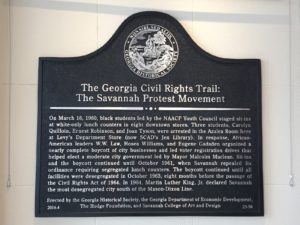 Erected by the Georgia Historical Society, the Georgia Department of Economic Development, The Hodge Foundation, and Savannah College of Art and Design

Tips for Finding this Marker: On the SCAD Jen Library Building near main entrance at the intersection of Abercorn and Broughton St.