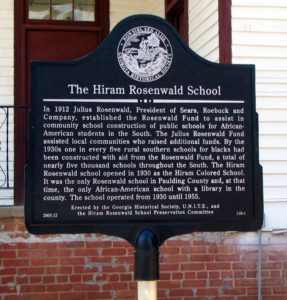 Marker Text: In 1912 Julius Rosenwald, President of Sears, Roebuck and Company, established the Rosenwald Fund to assist in community school construction of public schools for African-American students in the South. The Julius Rosenwald Fund assisted local communities who raised additional funds. By the 1930s one in every five rural southern schools for blacks had been constructed with aid from the Rosenwald Fund, a total of nearly five thousand schools throughout the South. The Hiram Rosenwald school opened in 1930 as the Hiram Colored School. It was the only Rosenwald school in Paulding County and, at that time, the only African-American school with a library in the county. The school operated from 1930 until 1955.

Tips for Finding This Marker: On GA 92, north of Oak Street in Hiram