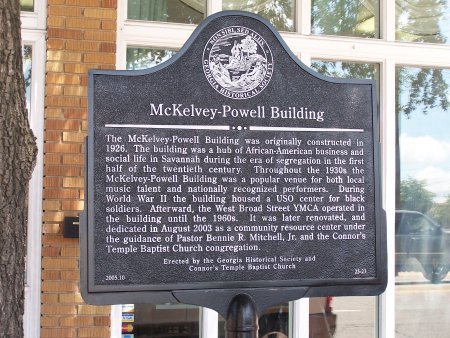 Marker Text: The McKelvey-Powell Building was originally constructed in 1926. The building was a hub of African-American business and social life in Savannah during the era of segregation in the first half of the twentieth century. Throughout the 1930s the McKelvey-Powell Building was a popular venue for both local music talent and nationally recognized performers. During World War II the building housed a USO center for black soldiers. Afterward, the West Broad Street YMCA operated in the building until the 1960s. It was later renovated, and dedicated in August 2003 as a community resource center under the guidance of Pastor Bennie R. Mitchell, Jr. and the Connor’s Temple Baptist Church congregation.

Erected by the Georgia Historical Society and Connor’s Temple Baptist Church in 2005.

Tips for Finding This Marker: At 714 Martin Luther King Jr. Boulevard in Savannah