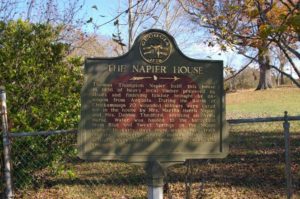 Marker Text: Thomas Thompson Napier built this house in 1836 of heavy local timber prepared by slaves and finishing lumber brought by ox-wagon from Augusta. During the Battle of Chickamauga 20 wounded soldiers were cared for in the house by Mrs. Martha Harris Napier and Mrs. Debbie Thedford, assisting an Army nurse. Water was hauled to the battlefield from Blue and Sweet Springs on the Napier place. In early days there was a race track on the property where Indians and early settlers were said to gather for races and chicken fights.

Tips for Finding This Marker: On Burning Bush Road 0.3 miles north of Red Belt Road / Three Notch Road, on the right when traveling north in Ringgold.