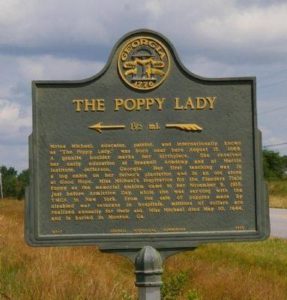 Marker Text: Moina Michael, educator, patriot, and internationally known as “The Poppy Lady,” was born near here August 15, 1869. A granite boulder marks her birthplace. She received her early education at Braswell Academy and at Martin Institute, Jefferson, Georgia. Her first teaching was in a log cabin on her father’s plantation and in an old store at Good Hope. Miss Michael’s inspiration for the Flanders Field Poppy as the memorial emblem came to her November 9, 1918, just before Armistice Day, while she was serving with the YMCA in New York. From the sale of poppies made by disabled veterans in hospitals, millions of dollars are realized annually for their aid. Miss Michael died May 10, 1944, and is buried in Monroe, Ga

Tips for Finding This Marker: Located at the intersection of Georgia Route 83 and Moina Michael Road in Good Hope.