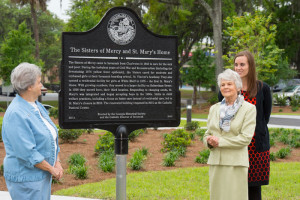 Marker Text: The Sisters of Mercy came to Savannah from Charleston in 1845 to care for the sick and poor. During the turbulent years of Civil War and Reconstruction (including the devastating 1876 yellow fever epidemic), the Sisters cared for students and orphaned girls at their Savannah boarding school, St. Vincent’s Academy. They also opened a residential facility for girls at White Bluff in 1875 – the first St. Mary’s Home. With growing numbers, they moved to a larger facility on Habersham Street. In 1938 they moved here, their third location. Responding to changing needs, St. Mary’s was integrated and began accepting boys in the 1960s. Shifts in child welfare practices, including a focus on foster care instead of residential care, led to St. Mary’s closure in 2010. The renovated building reopened in 2015 as the Catholic Pastoral Center.