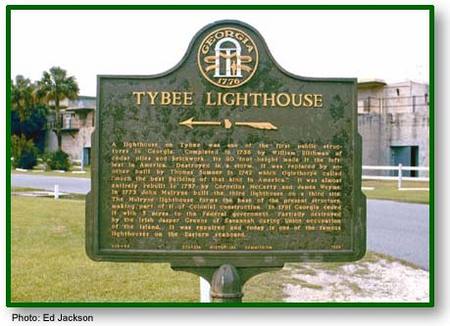 Marker Text: A lighthouse on Tybee was one of the first public structures in Georgia. Completed in 1736 by William Blithman of cedar piles and brickwork, its 90 foot height made it the loftiest in America. Destroyed in a storm, it was replaced by another built by Thomas Sumner in 1742 which Oglethorpe called “much the best Building of that kind in America.” It was almost entirely rebuilt in 1757 by Cornelius McCarty and James Weyms. In 1773 John Mulryne built the third lighthouse on a third site. The Mulryne lighthouse forms the base of the present structure, making part of it of Colonial construction. In 1791 Georgia ceded it with 5 acres to the Federal government. Partially destroyed by the Irish Jasper Greens of Savannah during Union occupation of the island, it was repaired and today is one of the famous lighthouses on the Eastern seaboard.

Tips for Finding This Marker: At the lighthouse on Tybee Island.