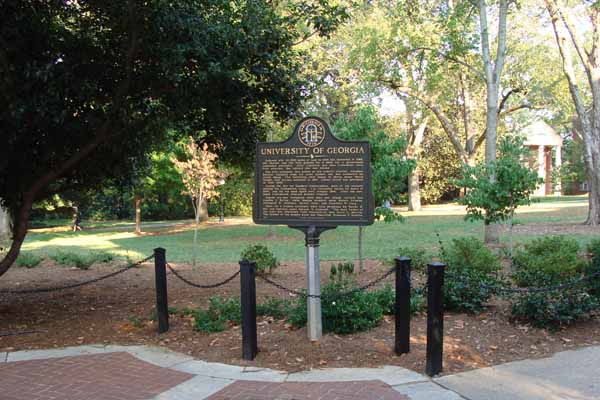 Marker Text: Endowed with 40,000 acres of land in 1784 and chartered in 1785, the charter was the first granted by a state for a government controlled university. After Louisville and then Greensboro were first selected, the current site was chosen.

The first president, and author of the school’s charter, Abraham Baldwin, resigned when the doors opened, and was succeeded by Josiah Meigs. The University first began to thrive under Moses Waddel, who became president in 1819. Alonzo Church was president in 1829-1859.

During the War for Southern Independence, most of the students entered the Confederate Army. The University closed its doors in 1864, and did not open again until January 1866. After the war, many Confederate veterans became students.

Plans for a modern university were first developed by Walter B. Hill and realized under Harmon W. Caldwell. The best known of the post-war presidents (now chancellors) was David C. Barrow. The builder of the modern plant was Chancellor Steadman V. Sanford.

Tips for Finding This Marker: At the intersection of Broad and College Streets on the University of Georgia campus in Athens.