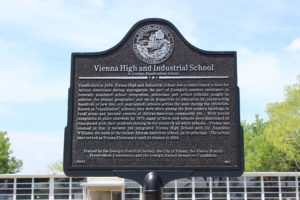 Marker text: Established in 1959, Vienna High and Industrial School was a consolidated school for African Americans during segregation. As part of Georgia’s massive resistance to federally mandated school integration, politicians and school officials sought to address the blatant geographic and racial disparities in education by constructing hundreds of new (but still segregated) schools across the state during the 1950s-60s. Known as “equalization” schools, they were often among the first modern buildings in rural areas and became centers of African-American community life. With forced integration in place statewide by 1970, many of these new schools were abandoned or repurposed with their students moving to the formerly all-white schools. Vienna was unusual in that it became the integrated Vienna High School with Dr. Napoleon Williams, the head of the former African-American school, as its principal. The school later served as Vienna Elementary until its closure in 2004.

Erected by the Georgia Historical Society, the City of Vienna, the Vienna Historic Preservation Commission, and the Georgia Natural Resources Foundation