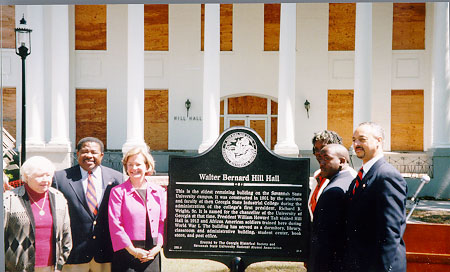 Marker Text: This is the oldest remaining building on the Savannah State University campus. It was constructed in 1901 by the students and faculty of then Georgia State Industrial College during the administration of the college’s first president, Richard R. Wright, Sr. It is named for the chancellor of the University of Georgia at that time. President William Howard Taft visited Hill Hall in 1912 and African American soldiers trained here during World War I. The building has served as a dormitory, library, classroom and administrative building, student center, book store, and post office.

Tips for Finding This Marker: In Alexis Circle, on Savannah State University campus in Savannah