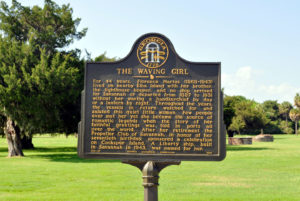 Marker Text: For 44 years, Florence Martus (1868-1943) lived on nearby Elba Island with her brother, the lighthouse keeper, and no ship arrived for Savannah or departed from 1887 to 1931 without her waving a handkerchief by day or a lantern by night. Throughout the years, the vessels in return watched for and saluted Florence. Few people ever met her yet she became the source of romantic legends when the story of her faithful greetings was told in ports all over the world. After her retirement, the Propeller Club of Savannah sponsored a celebration on Cockspur Island in honor of her seventieth birthday in 1938. A Liberty ship, built in Savannah in 1943, was named for her.

Tips for Finding This Marker: On Fort Pulaski Road in Savannah.