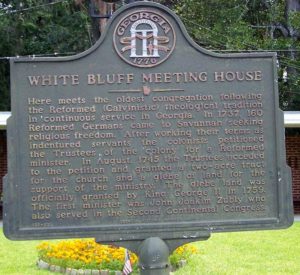 Marker Text: Here meets the oldest congregation following the Reformed (Calvinistic) theological tradition in continuous service in Georgia. In 1737, 160 Reformed Germans came to Savannah seeking religious freedom. After working their terms as indentured servants the colonists petitioned the Trustees of the colony for a Reformed minister. In August, 1745 the Trustees acceded to the petition and granted a two-acre tract for the church and a glebe of land for the support of the ministry. The glebe land was officially granted by King George II in 1759. The first minister was John Joakim Zulby who also served in the Second Continental Congress.

Tips for Finding This Marker: At 10710 White Bluff Road in Savannah.