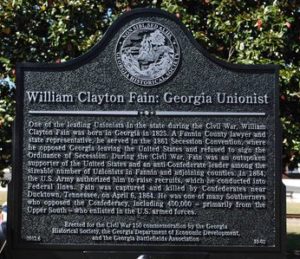 Marker Text: One of the leading Unionists in the state during the Civil War, William Clayton Fain was born in Georgia in 1825. A Fannin County lawyer and state representative, he served in the 1861 Secession Convention, where he opposed Georgia leaving the United States and refused to sign the Ordinance of Secession.  During the Civil War, Fain was an outspoken supporter of the United States and an anti-Confederate leader among the sizeable number of Unionists in Fannin and adjoining counties. In 1864, the U.S. Army authorized him to raise recruits, which he conducted into Federal lines. Fain was captured and killed by Confederates near Ducktown, Tennessee, on April 6, 1864. He was one of many Southerners who opposed the Confederacy, including 400,000 – primarily from the Upper South – who enlisted in the U.S. armed forces.

Erected for the Civil War 150 commemoration by the Georgia Historical Society, the Georgia Department of Economic Development, and the Georgia Battlefields Association

Tips for Finding This Marker: On East Main Street in Blue Ridge