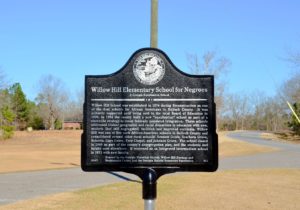 Marker Text: Willow Hill School was established in 1874 during Reconstruction as one of the first schools for African Americans in Bulloch County. It was privately supported until being sold to the local Board of Education in 1920. In 1954 the county built a new “equalization” school as part of a statewide strategy to resist federally mandated integration. These schools addressed blatant geographic and racial disparities in education with new, modern (but still segregated) facilities and improved curricula. Willow Hill was one of five such African-American schools in Bulloch County and consolidated several older rural schools: Bennett Grove, Scarboro Grove, Rehovia, Gays Grove, Free Chapel, and Johnson Grove. The school closed in 1969 as part of the county’s desegregation plan, and the students and faculty sent elsewhere. It reopened as an integrated intermediate school in 1971 with new faculty.

Tips for Finding This Marker: At 4235 Willow Hill Road in Portal