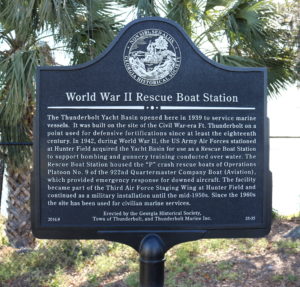 Marker Text: The Thunderbolt Yacht Basin opened here in 1939 to service marine vessels. It was built on the site of the Civil War-era Ft. Thunderbolt on a point used for defensive fortifications since at least the eighteenth century. In 1942, during World War II, the US Army Air Forces stationed at Hunter Field acquired the Yacht Basin for use as a Rescue Boat Station to support bombing and gunnery training conducted over water. The Rescue Boat Station housed the “P” crash rescue boats of Operations Platoon No. 9 of the 922nd Quartermaster Company Boat (Aviation), which provided emergency response for downed aircraft. The facility became part of the Third Air Force Staging Wing at Hunter Field and continued as a military installation until the mid-1950s. Since the 1960s the site has been used for civilian marine services.

Erected by the Georgia Historical Society, Town of Thunderbolt, and Thunderbolt Marine Inc.

Tips for Finding This Marker: Located at 3124 River Drive, Thunderbolt