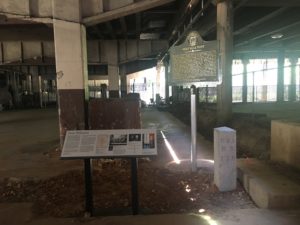 Marker Text: This Zero Mile Post marks the Southeastern Terminus of the Western and Atlantic Railroad, about which a settlement grew and eventually became Atlanta. This railroad, to Chattanooga, Tennessee, was built, and still is owned by the State of Georgia. It was authorized by the State Legislature December 21, 1836. The route was surveyed by Colonel Stephen Harriman Long, Chief Engineer, May 12, 1837 to November 3, 1840. Construction began March 1838. The original terminus was located near the present-day Georgia World Congress Center and moved in 1842 to a site beneath the Central Avenue bridge and adjacent to Underground Atlanta. The settlement which sprang up was called Terminus. It was incorporated as the town of Marthasville, December 23, 1843. The name was changed to Atlanta, December 26, 1845. It was incorporated as the City of Atlanta, December 29, 1847, with corporate limits extending one mile in every direction from the State Depot which was between here and what is now Pryor Street. Beginning in 1850, Western and Atlantic Railroad placed mile posts along its 138-mile line to Chattanooga, one at each mile. A new City Charter approved February 28, 1874 redefined the corporate limits as a circle one mile and a half in every direction from this mile post. To ensure its long-term preservation and wider public accessibility, in 2018 the original mile post was moved to the Atlanta History Center and a replica was installed in its place.

Tips for Finding This Marker: Under the Central Avenue bridge over the railroad tracks, adjacent to Underground Atlanta in Atlanta