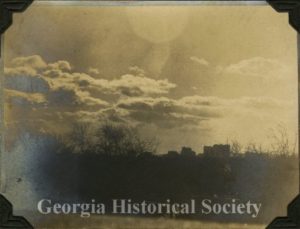 View of a sky with buildings in the background

Imagine being able to make your dream of building a giant flying boat into a reality. In 1912, retired Army captain, William A. Batson, traveled from Illinois to Savannah, Georgia and did just that. Well, almost.

Batson Air Navigation Company began setting up its Dutch Island manufacturing facility in early 1913 and went to work straight away planning the Batson Aero Yacht. An early aeronautic visionary, Batson imagined building the boat-like aircraft to easily carry cargo, crew, and passengers across the Atlantic Ocean to Liverpool, England. Passenger fare would be no small amount at $2,000 for the projected 36-hour flight.

On November 17, 1913, Batson’s highly anticipated invention was finally afloat on the waters of the Herb River in its debut to reporters and spectators from near and far. Although there are mixed reports of exactly how and when it happened, while anchored in the river, the plane was damaged in an apparent accident. Not long after, it was announced that all Aero Yacht activities were suspended and a smaller version of the aircraft, later dubbed the Dragonfly, would be constructed to carry out all future trials. Pioneer aviators and engineers from around the world flocked to Savannah to inspect the planes and offer their assistance, but the fate of Captain Batson’s invention seemed to have already been determined. Due to a lack of continued support, the Aero Yacht would never get off the ground to make its transatlantic flight.

To more learn about Batson’s flying machine, come visit the Georgia Historical Society to explore the archives’ William E. Scarborough Collection on the Batson Aero Yacht Project and to view other various items such as newspaper clippings, journal articles, manuscripts, photographs, and more.