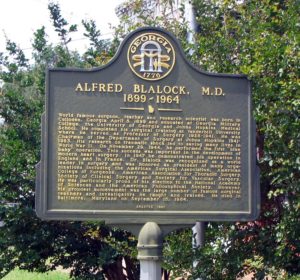 This week’s #MarkerMonday highlights Alfred Blalock, MD, the surgeon known for performing the first “blue baby” operation. Alfred Blalock was born in Culloden, Georgia on April 5, 1899. First educated at Georgia Military College, Blalock received a Bachelor of Arts degree from the University of Georgia in 1918, and his M.D. from Johns Hopkins University in 1922. Blalock completed his surgical residency at Vanderbilt University, later serving as Professor of Surgery from 1928-1941. While at Vanderbilt, Blalock researched hemorrhagic and traumatic shock. He demonstrated shock resulted primarily from blood loss and encouraged the use of plasma (or whole blood) transfusions at the onset of shock. His research on traumatic shock saved many lives in World War II. 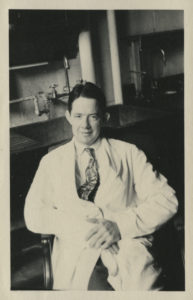 Blalock returned to Johns Hopkins University in 1941 as Chairmen of the Department of Surgery at Johns Hopkins with Vivien Thomas, Blalock’s surgical assistant at Vanderbilt, the two men developed a shunt technique to bypass the narrowing aorta. Blalock was also introduced to Helen Taussig, a pediatric cardiologist, who told him about several of her cases of children suffering from Tetralogy of Fallot, commonly referred to as “blue baby syndrome.” In “blue baby” cases, the blood pushed past the lungs, depriving the body of oxygen, and gave the skin a blue pallor. On November 29, 1944, Blalock performed the first “blue baby” operation on a fifteen-month-old child with Taussig and Thomas. The successful operation used a shunt to bypass constricted vessels which lead blood away from the heart. After performing over 1,000 surgeries to correct congenital heart defects and years of research, teaching, and training 38 chief residents at Johns Hopkins, Blalock retired in 1964. On September 15, 1964, he died of bladder cancer in Baltimore, Maryland, and is buried in Druid Ridge Cemetery in Pikesville, Maryland.

Explore the links below to learn more about the life and career of Alfred Blalock, MD, and Blue Baby Syndrome.