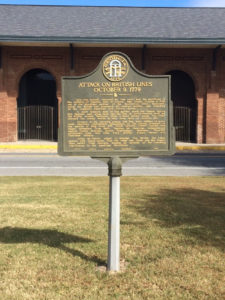 This week’s #MarkerMonday highlights the Siege of Savannah (also known as the Second Battle of Savannah) during the American Revolution in 1779. In December 1778, the British captured Savannah and restored colonial rule to Georgia. The following year, plans were made by the Continental Army to retake the city from the British using the combined forces of the patriots and their French allies. In September 1779, the Siege of Savannah began when a fleet of French warships under the command of Comte Charles Henri d’Estaing appeared off the coast of Tybee Island. In preparation for battle, the British sunk six ships in the Savannah River between Tybee Island and Savannah to act as a blockade. D’Estaing chose to land his soldiers and canons south of Savannah along the Vernon River. Under the cover of darkness, the French forces surrounded Savannah. Local militia men and Continental Army troops led by General Benjamin Lincoln from Charleston joined them. On September 16, d’Estaing demanded that British General Augustine Prevost surrender the garrison at Savannah. Prevost delayed his response and asked for twenty-four hours to consider d’Estaing’s demands, which allowed time for British reinforcements to arrive from Beaufort, South Carolina. 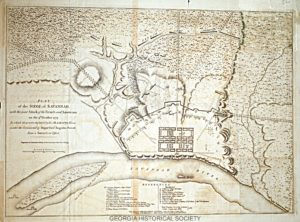 “Plan of the Siege of Savannah” From a survey by an Officer. Engraved for Stedman’s History of the American War, Jan. 20th 1794.” From the Georgia Historical Society Map Collection, 1361MP-601.

Instead of launching an outright assault, Gen. Lincoln and d’Estaing decided to bombard the city to weaken British fortifications. After laying siege to Savannah for three weeks, the patriot and French forces stormed the British defenses early on October 9. Some if the heaviest fighting took place on the Spring Hill redoubt on the western side of the city. During the assault, French and patriot forces were unable to break through British fortifications. Lincoln and d’Estaing’s forces withdrew, and the siege was officially abandoned on October 17, 1779. The patriots under General Lincoln withdrew toward Charleston, and the French forces withdrew to their ships on the Savannah River. The Siege of Savannah was one of the bloodiest battle of the American Revolution, with patriot and French forces losing between 1000 and 1200 men and the British losing roughly 40. The British would continue to hold the city for three more years, finally leaving in July 1782.

Explore the links below to learn more about the Siege of Savannah and the Revolutionary War in Georgia.

GHS is proud to house the Georgia Provincial Congress Proceedings from 1775-1779, which contains a journal account of the Siege of Savannah.

Opening the Archives: Plan of the Siege of Savannah, 1779

History Net: Siege of Savannah During the American Revolution

BlackPast.org: Haitian Soldiers at the Battle of Savannah (1779)

Anon., “Account of the Siege of Savannah, from a British Source,” Collections of the Georgia Historical Society 5, pt. 1 (Savannah, Ga.: Braid and Hutton, 1901).

Lawrence, Alexander A. Storm over Savannah: The Story of Count d’Estaing and the Siege of the Town in 1779 (Athens: University of Georgia Press, 1951).

The Georgia Historical Quarterly has published several articles related to the Siege of Savannah and the Revolutionary War in Georgia which can be accessed on JSTOR. If your library does not have access to JSTOR, you can go to www.jstor.org and create a free MyJSTOR Account.