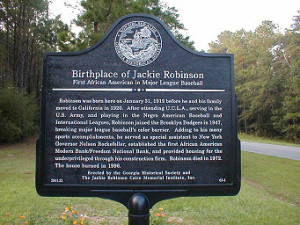 This week’s #MarkerMonday highlights a Georgia athlete and businessman, Jackie Robinson. Jackie Robinson was born in Cairo, Georgia, on January 31, 1919 and spent much of his young-adult life in California. While Robinson is well known for his athletic ability and time playing baseball for the Brooklyn Dodgers, he was also a successful business man. Robinson, who was referred to as baseball’s “Great Experiment,” was the first African American to be named MLB Rookie of the Year, the first to win baseball’s Most Valuable Player award, and the first to be elected into the Baseball Hall of Fame in 1962. After retiring from baseball in 1957, Robinson went to work at Chock full o’Nuts, a coffee company based in New York, as Vice President and Director of Personnel. Robinson stated that he accepted the job with Chock full o’Nuts because the company wanted him to be an integral part of the team and not simply “a name on their letter head.” 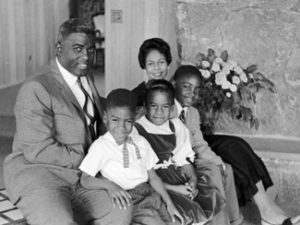 During an interview, Robinson’s wife, Rachel, explained the company gave him a chance to invest in people, as personnel issues were always important to him–especially the hiring, training, compensation, and promotion of employees.  During this time, Robinson was also selected to serve on the company’s Board of Directors. Robinson was also an ardent advocate for civil and economic rights and helped found the Freedom National Bank in Harlem. This African-American owned and operated commercial bank brought an “economic development tool” to Harlem, providing people with opportunities to get mortgages and small business loans. Robinson served as the bank’s first Chairman of the Board. Mrs. Robinson also recalled in an interview that Robinson wanted to see people succeed and wanted to provide them with materials and knowledge to make success possible.

Explore the links below to learn more about Jackie Robinson.

Robinson the Citizen – Includes interviews with Robinson’s wife and children