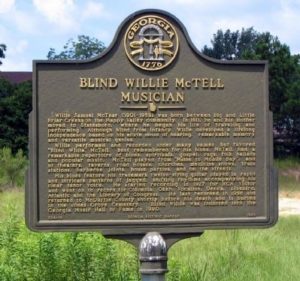 This week’s #MarkerMonday highlights the life of blues musician, Willie McTear, who is better known as “Blind Willie” McTell. Willie Samuel McTear (sometimes McTeir) was born in Thomson, Georgia, in May 1901. While it is unclear if McTell was born blind or if he gradually lost his sight during late childhood, he was said to have had an extraordinary sense of hearing and touch. McTell was sent to attend schools for the blind in Georgia, New York, and Michigan and showed a proficiency in music. He was also capable of reading and writing music in braille. In 1911, he and his mother moved to Statesboro, Georgia, where during his early teenage years, he learned to play the guitar. 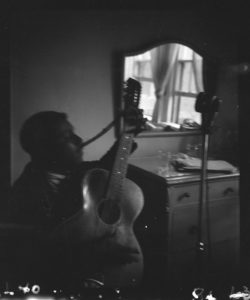 After his mother passed away in the 1920s, McTell left Statesboro to become a traveling musician, travelling with carnivals and medicine shows. During the 1920s and 30s, McTell performed along the Georgia circuit consisting of Atlanta, Augusta, Savannah, and Macon, as well as in New York City and parts of North Carolina. His recording career began in 1927, with Victor Records where he recorded one of his most popular songs, “Statesboro Blues.” He performed and recorded under many names to skirt contractual agreements but favored “Blind Willie” McTell. McTell’s last blues recording took place in Atlanta in 1956. The following year, he left his music career to become the pastor of Atlanta’s Mt. Zion Baptist Church. McTell died of a cerebral hemorrhage in August 1959 and was buried in Jones Grove Cemetery in Thomson. He was inducted into the Blues Foundation’s Blues Hall of Fame in 1981 and was later inducted in the Georgia Music Hall of Fame in 1990.

Explore the links below to learn more about “Blind Willie” McTell.

Lawrence Cohn, ed., Nothing but the Blues: The Music and the Musicians (New York: Abbeville Press, 1993).