Marker Monday: Bobby Jones and the Beginning of the Grand Slam 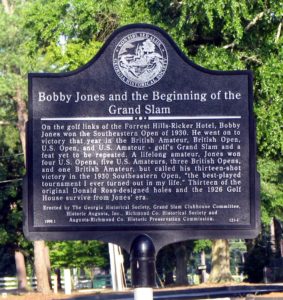 This week’s #MarkerMonday shines a spotlight on golfer Bobby Jones. Robert Tyre “Bobby” Jones, Jr. was born in Atlanta, Georgia, on March 17, 1902. As a child, Jones grew up playing golf at Atlanta’s East Lake Country Club, winning many regional events by the age of fourteen. In 1916, Jones entered his first national competition, the U.S. Amateur, held at the Merion Cricket Club near Philadelphia, Pennsylvania. Between 1923-1930, he won thirteen major championships, however, because Jones always played as an amateur he did not receive any prize money. In 1930, Jones won the U.S. Amateur, the U.S. Open, the British Open, and the British Amateur making him the first golfer to win the Grand Slam (to qualify as a Grand Slam, the golfer had to win all four tournaments in the same year). 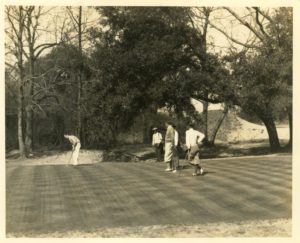 During his years on the golf circuit, Jones also focused on his education, graduating with a degree in mechanical engineering from Georgia Tech, an English literature degree from Harvard, and passing the Georgia Bar after three semesters at Emory.  Jones retired from competition at age 28, but did not retire from the golf world.  He continued his golf career with a series of instructional golf shorts filmed between 1931-1933. Jones also co-founded the Augusta National Golf Club with Clifford Roberts in Augusta, Georgia. The coursed opened for play in 1933, and, in 1934, hosted the Augusta National Invitational Tournament, later known as the Masters. In 1948, Jones contracted a rare spinal disease, syringomyelia, and was confined to a wheelchair until his death in December 1971. He is buried in Oakland Cemetery in Atlanta.

Explore the links below to learn more about Bobby Jones.

GHS is proud to house a collections of photos of a Golf Tournament at Savannah Golf Club, with Bobby Jones, February 20-22, 1930. This images are part of the Foltz Photography Studio (Savannah, Ga.), photographs, 1899-1960 Collection.