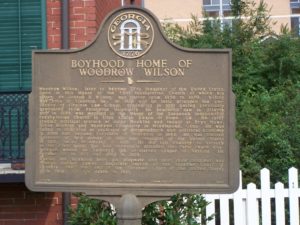 Wilson was born in Staunton, Virginia, to Dr. Joseph Ruggles Wilson and Janet E. Woodrow in 1856. Before his first birthday, his family moved to Augusta, Georgia, when First Presbyterian Church hired Dr. Wilson as its pastor. As a child, Wilson spent his formative years in Georgia. The Wilsons lived in the manse across the street from the church between 1858 and 1870. As a child, Wilson did not learn the letters of the alphabet until he was nine years old, and he learned to read by the age of eleven. Some historians believe he experienced the symptoms of developmental dyslexia. Wilson overcame that in his many years as a student and active intellectual. 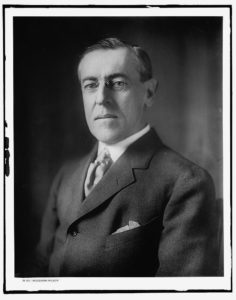 Wilson studied politics and history at Princeton University and graduated in 1879, and afterwards he went on to study and practice law for a short time in Georgia. Woodrow Wilson graduated from John Hopkins University in 1886 with his PhD in political science and soon after began his teaching career. He taught at Bryn Mawr College, Johns Hopkins, and Wesleyan University in Middletown, Connecticut. In 1890, he returned to his undergraduate alma mater, Princeton University, as a professor of jurisprudence and political economy and became president of the university in 1902.

Wilson left Princeton to be Governor of New Jersey and was elected President of the United States in 1912. He was the first president to have earned a doctoral degree.  During his presidency, Woodrow Wilson is remembered for his leadership as President during and immediately after World War I. He was instrumental in the creation of the Treaty of Versailles through his Fourteen Points. Toward the end of his presidency, he suffered several strokes. After leaving office, Wilson retired from public service and died in 1924.

Explore the links below to learn more about Woodrow Wilson and his childhood in Georgia.

GHS is proud to house a postcard of Woodrow Wilson’s Boyhood Home and the First Presbyterian Church in Augusta, Georgia. It also holds several of Wilson’s publicized works in its Main Collection, which are listed in the Further Reading section below.

The Georgia Historical Quarterly has published an article about Woodrow Wilson’s career as a lawyer before he became a teacher, and it can be accessed on JSTOR. If your library does not have access to JSTOR, you can go to www.jstor.org and create a free MyJSTOR Account.

Woodrow Wilson was also an author. Below is a list of his works that are in the Georgia Historical Society Main Collection.