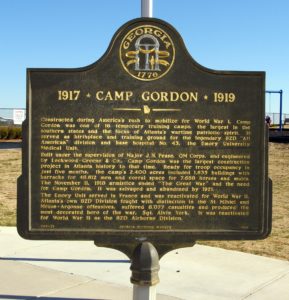 This week’s #MarkerMonday highlights Camp Gordon, in Chamblee, Georgia.  When the United States entered World War I in 1917, the War Department established a series of sixteen temporary training camps around the country. Chamblee, north of Atlanta, was chosen as the site for Camp Gordon, named for former Georgia governor and U.S. Senator John B. Gordon. Opening in July 1917, the camp was the largest construction project in Atlanta’s history at that time. The site’s 1,635 buildings contained barracks for 46, 000 men, as well as accommodations for over 7,000 horses and mules. Camp Gordon served as the birthplace and training facilities of the 82D “All American” Division, an airborne infantry unit of the United States Army.  The division played an important role in the Battle of St. Mihiel and Meuse-Argonne Offensive on the Western Front, the latter brought the war to an end. The camp also served as a base hospital for the Emory University Medical Unit. Referred to as the Emory Unit, the group trained at Camp Gordon for several months before deploying to Blois, France in 1918. Camp Gordon was demobilized in 1919 after the end of the war, and abandoned by 1921. During World War II, the Naval Air Station Atlanta occupied the site. The 82D Division was reactivated and served in Europe as the 82D Airborne Division, and the Emory Unit operated as General Hospital 43 in North African and France. Since 1959, the site of Camp Gordon has continued to be used as the DeKalb-Peachtree Airport.

Explore the links below to learn more about Camp Gordon, the 82D Airborne Division, and the Emory Unit.

AJC.com: When Emory went to war