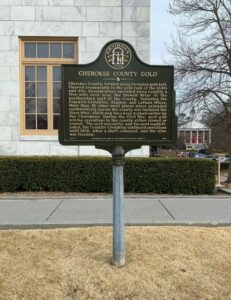 This week’s #Marker Monday looks at the Cherokee County Gold historical marker in Cherokee County. Although there are several stories about who first discovered gold, by the end of the 1820s, news that there was gold in North Georgia brought thousands of people with hopes of becoming rich. Georgia’s gold veins stretch from the Rabun County area in a southwestern line to the region near Harlson and Caroll Counties and into Alabama. Georgia’s gold is some of the naturally purest in the world at around 20 to 23 carats or about 98 percent pure.

Cherokee County was home to many mines during the gold rush of the 1830s and 40s. The most successful mine was the Franklin-Creighton Mine, operated along the Etowah River near Ball Ground, Georgia. Mary Franklin, a widow from Athens, Georgia, drew a 40-acre lot in the Georgia Gold Lottery of 1832, which distributed 35,000 lots of land previously owned by the Cherokees. After the discovery of gold, Mrs. Franklin received offers to buy the land, but she chose to continue operating the mine under the supervision of her family. Within a few years, the Franklin Mine was successful enough to expand to 500 acres and purchase updated mining equipment and enslaved persons to work the mines. Mining operations slowed and upon Mary’s death her son took over the mine but found little success.

The Franklin Mine changed hands several times following the Civil War, but owners struggled to see the same profits that Mary Franklin found. Success was discovered again when the Creighton Mining Company took over operations of the mines. Unlike the Franklins, who only worked the land to the waterline, the Creighton Mining Company was able to dig beneath the earth and into the veins of gold. The mine also used modern techniques for separating gold from sulfide minerals, which allowed them to maximize the gold extracted.

Geological Survey of Georgia: A Preliminary Report on a part of the Gold Deposits of Georgia (1896) 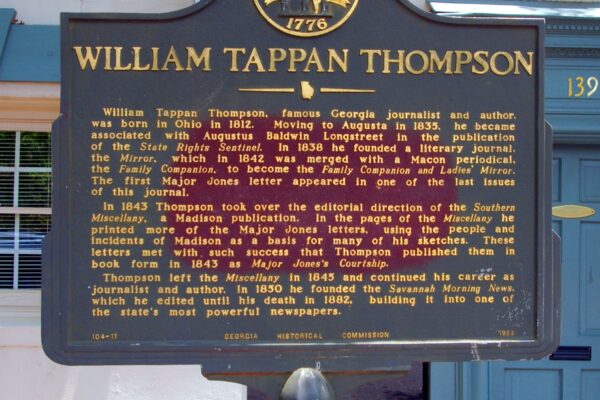