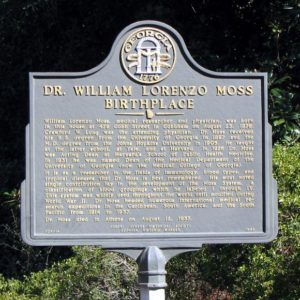 This week’s #MarkerMonday highlights William Lorenzo Moss, medical researcher and physician. William Lorenzo Moss was born in Athens, Georgia on August 23, 1876. After receiving his Bachelor of Science degree from the University of Georgia, Moss began his medical training at Johns Hopkins University, graduating with his M.D. in 1905. While studying at Johns Hopkins, Moss earned the nickname, “The Vampire,” because of his interest in the study of blood. After finishing his residency, Moss also completed post-graduate medical studies Berlin from 1907-1908. Moss returned to the United States to teach and perform medical research at John Hopkins, the State Institute for the Study of Malignant Diseases in Buffalo, New York, and at Yale and Harvard Universities. 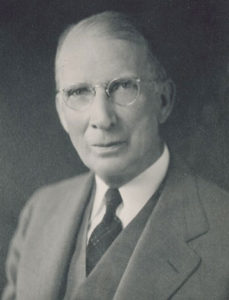 Dr. Moss is best known as a researcher in the fields of immunology, blood types, and tropical diseases. In 1910, while at Johns Hopkins, Moss published a report on what he titled the Moss System, a classification system of the four blood groups labeled by the roman numerals I-IV, which was in use until World War II when it was replaced by the Landsteiner System (A, B, AB, O). Dr. Moss also headed numerous international medical research expeditions to study in the fields of immunology, blood types, and tropical diseases in the Caribbean, South America, and the South Pacific from 1914 to 1937. His research was interrupted by the World War I, when he served in the Medical Corps of the American Expeditionary Force. After the war Moss resumed his research and teaching. He became acting Dean Acting Dean at Harvard’s School of Public Health Medicine in 1926. Moss returned to Georgia in 1931, when he was named Dean of the Medical Department of the University of Georgia (now Augusta University’s Medical College of Georgia) and serve in that position until 1934. Moss died in Athens on August 12, 1957. He is buried in Oconee Hill Cemetery.

Explore the links below to learn more about William Lorenzo Moss, the Moss System, and his other contributions to the medical field.

Augusta University: History of the Medical College of Georgia- 1931-1934